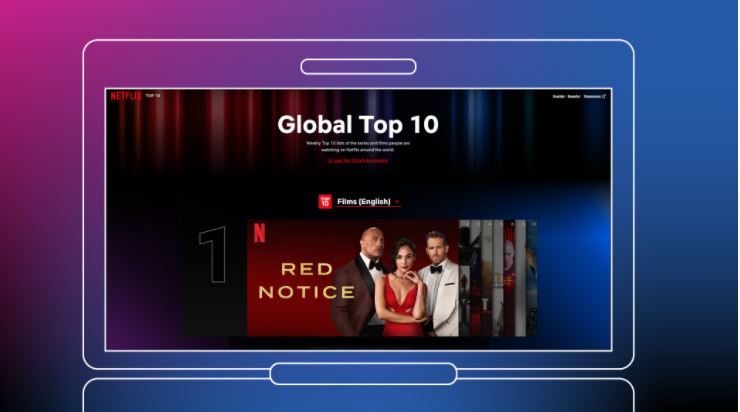 Netflix has launched a weekly “Top10 on Netflix” – a new website with weekly global and country lists of the most popular titles on their service, to cater for periodic reviews of their movies. This is to help viewers know what movies are trending in other parts of the world.

Netflix plans to publish the new weekly “Top 10 on Netflix” every Tuesday based on hours viewed from Monday to Sunday the previous week for both original and licensed titles. This “Top 10 on Netflix” has been categorised as follows: global Top 10 lists for Films (English), TV (English), films (non-English), and TV (non-English), as well as rankings for over 90 countries. The website is currently available in English and Spanish, with more languages to come next year.

This “Top 10 on Netflix” will run simultaneously with Netflix’s daily country Top 10 rows that were introduced last year and will be based on views. The need for this transparency is stemming from speculations about Netflix’s movies metrics over the years and according to Netflix, it is aware that fans love to track our most popular films and shows of all time, so they will update our overall lists, which they first published last month, as new titles become mega hits. These lists will be based on the total hours viewed in a title’s first 28 days on Netflix.

Netflix admitted that “Figuring out how best to measure success in streaming is hard, and there’s no one perfect metric. Traditional measures like box office or share of audience (which was designed to help advertisers understand success on linear TV) aren’t relevant to most streamers, including Netflix. Having looked at the different options, we believe engagement as measured by hours viewed is a strong indicator of a title’s popularity, as well as overall member satisfaction, which is important for retention in subscription services. In addition, hours viewed mirrors the way third parties measure popularity, encompasses re-watch (a strong sign of member joy) and can be consistently measured across different companies”

The new website will provide a more transparent outlook and serve as a tracker to know how Netflix’s content is performing.

Netflix has summarized the above update as follows:

As summarized by Netflix, here are the Top 10 things you need to know about the methodology behind Top10.Netflix.com: